Java 9 is a major release, which brings highly anticipated modularization.

I’m late to Java 9 feature release party. But I’ll try to list all features that have captured my attention.

Most notable feature in this release is Java module system a.k.a “Jigsaw”.

Before Java 9 all public classes loaded from external Jars were accessible in the project. Because of this reason, it is easy to accidentally expose API’s that are meant to be used privately. The new module system addresses it by defining exposed packages in module-info.java file.

In this example, I have also defined dependency our budget module depends on ledger module. Ledger module exposes only classes in com.dovydasvenckus.ledger package.

Also, JDK was modularized with this release, using jlink tool you can create minimal JRE, that will be deployed with your application. If your application does not require java.sql module you can make JRE that won’t include it. It makes sense to deploy lightweight JRE on embedded devices or when we are using microservices that do not require full JDK. More on it Openjdk docs.

This topic is too wide to describe in this blog post, so I highly recommend to visit official documentation OpenJDK Jigsaw quick start.

This module is released in incubation state. You can use incubating modules now, but they will be officially released in a future release. In JDK10 it should be moved from jdk.incubator.httpclient to java.httpclient module. Also, JDK10 might introduce breaking changes.

Finally, Java has introduced REPL(Read Evaluate Print Loop) shell that allows running Java commands interactively. Sometimes it is really useful to test code snippet, for this purpose I have used GroovyConsole. But GroovyConsole is not perfect because it uses Groovy language which is a superset of Java.

As you can see commands does not require a semicolon to execute them. Also, shell supports Tab autocomplete, enjoy it :).

Also, I had hope that shell would allow executing commands from a Java file. But it does not support this feature. In my opinion, it would be nice to be able to write Java script files and execute them using single command. So for Java scripting, I’ll stick with Nashorn or Groovy. 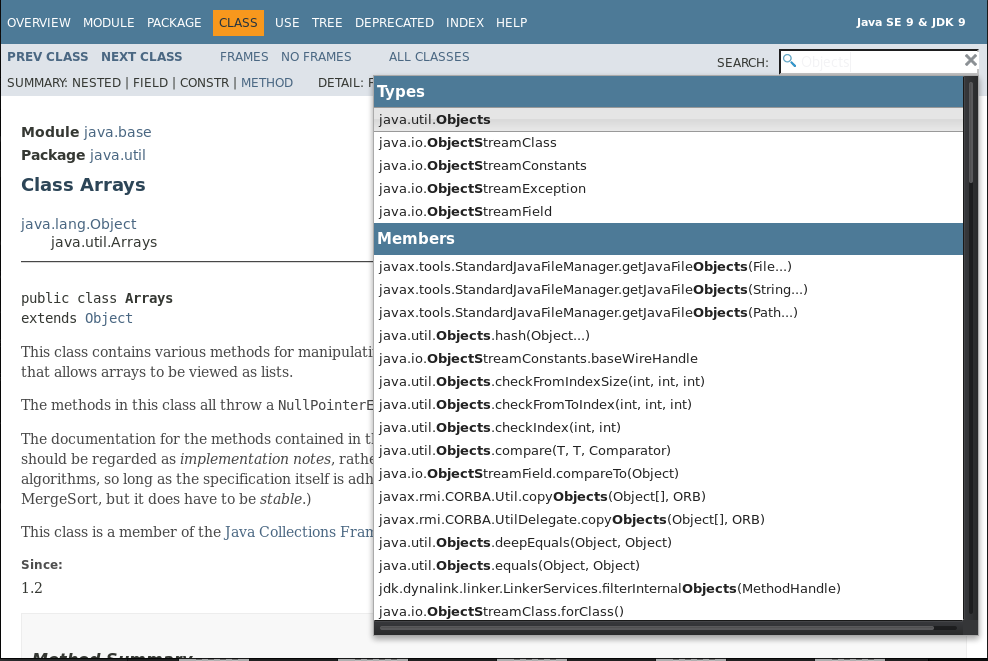 This improvement is small but convenient. Now Java docs support auto completable search. Before this feature, it was painfully slow to find something in Java API documentation because you had to navigate using mouse and you had to know in which package class resides. Whenever I was searching for class I have always googled because it was a faster way to navigate to class.

One of my favorite features of Java 8 was Streams. It changed the way many people write code that deals with collections. Code written with streams is compact and easily readable.

In Java 9 streams got even better. Stream has 4 new methods:

Java 9 has some improvements to processes API. It has added a few method to deal with system processes.

For example, it was painful to get PID, you had to write boilerplate code that was OS dependent. Now it is easily retrievable using a single command.

I have mentioned most notable features. There are probably plenty features that I have missed. For me, Java 9 release is quite an exciting one.

Modularization is a huge feature and in my opinion, it will take quite some time to it being widely adopted.

Besides modularization Java 9 includes many small handy features. I’ll try to adopt these new features in my code.